Project Info
Project's Name: Blossom.
Project's Type: Nature Interpretation. BSC Graduation Project.
Year: 2017
Project's Area: 4500 m2
Project's Location: Ain Ghazal-Amman-Jordan.
Supervision: Prof. Shatha Abu Khafajeh
Blossom Interpretation Centre
Between the environmental crisis and the architectural negligence in Ain Ghazal - Amman, comes a need for interpretation on the 3 main layers that are both embedded and displayed within the site: the historical, the environmental, and the architectural layers that hold the special values of socio culture, education, and the mini-culture that has built itself and buried its roots in Ain Ghazal.
And while tradition and history are being bagged and sold, the implication of the phrase "interpretation" on the mentioned values becomes quite critical, as this project deals with sensitive parameters of a mini-culture as well as contextual danger.
Hence the creation of Blossom. It's a physical transition between the socio cultural forces and the architectural directions that have shaped the site. Blossom maintains the site's values, enforces them, and adds on new much needed values in accordance to the needs of both the users and the architectural context.
Functionally, blossom contains 4 simple parts that translates into Environmental and Educational wings, sandwiching a couple of Socio Cultural masses that encloses "the stair" and " the heart" . 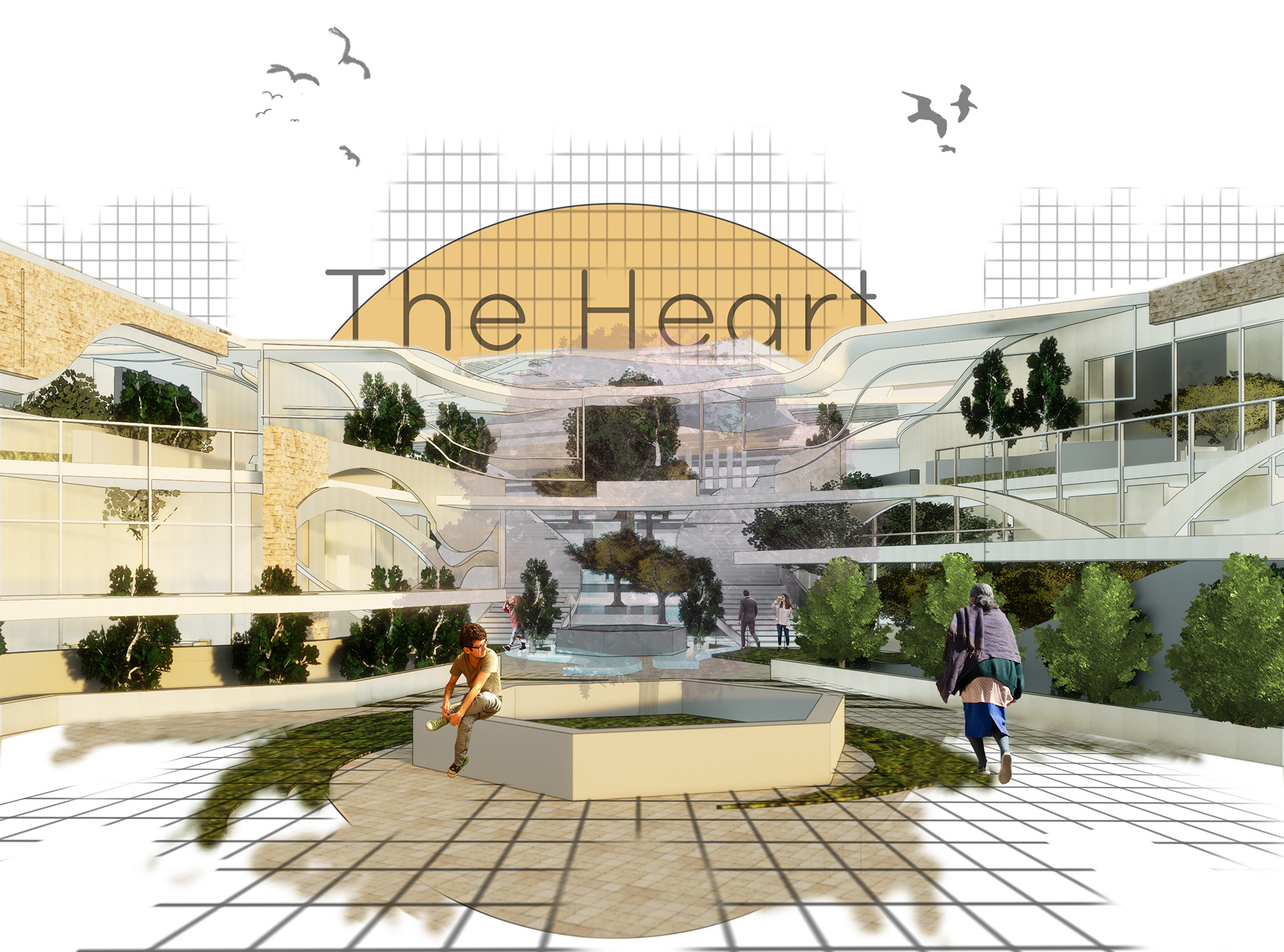 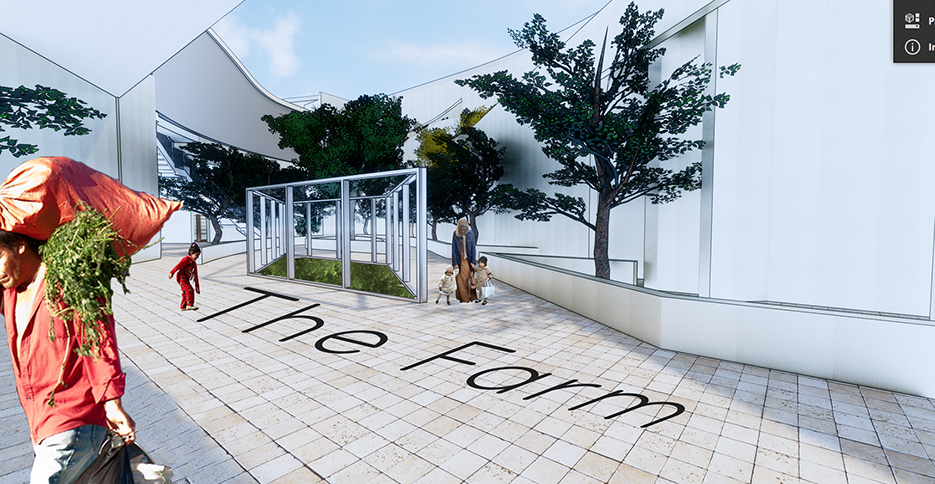 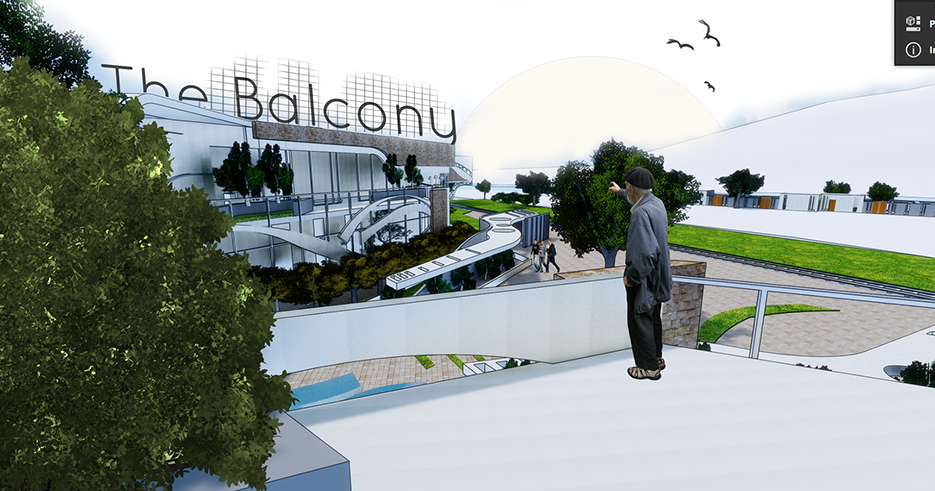 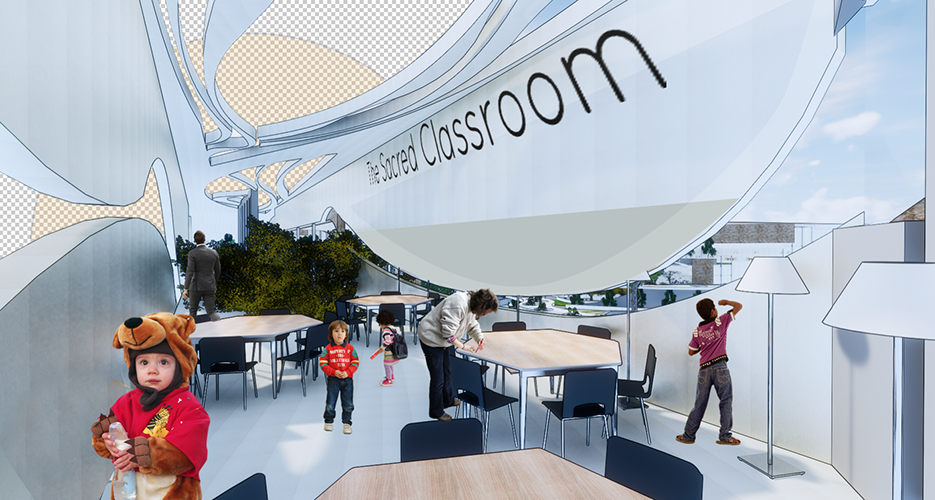 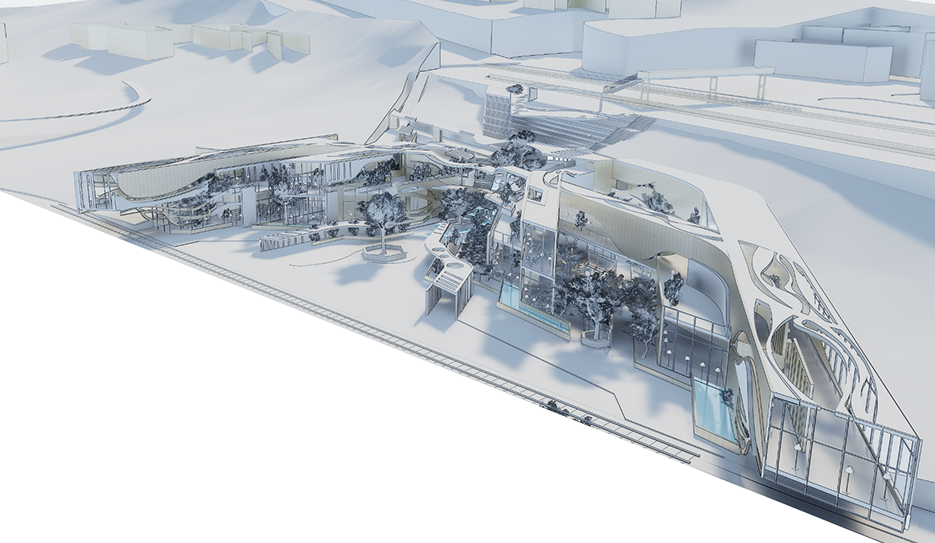 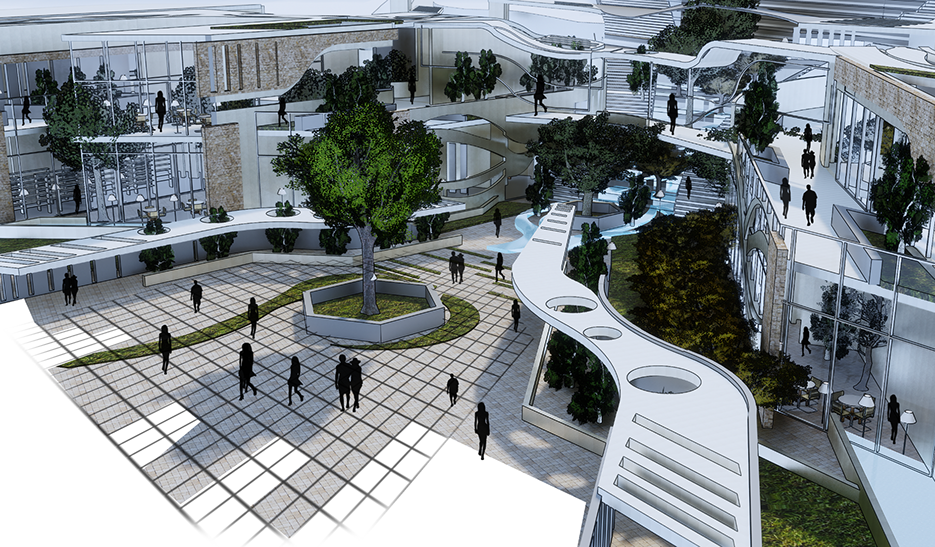 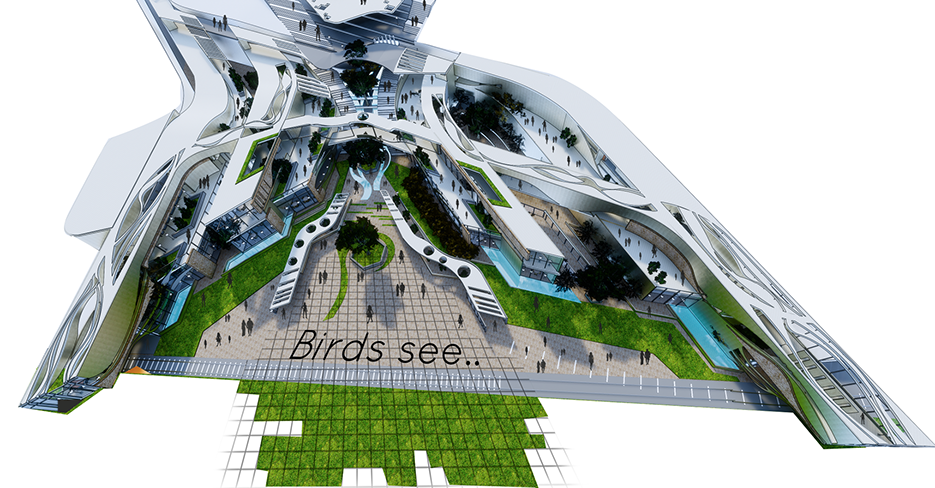 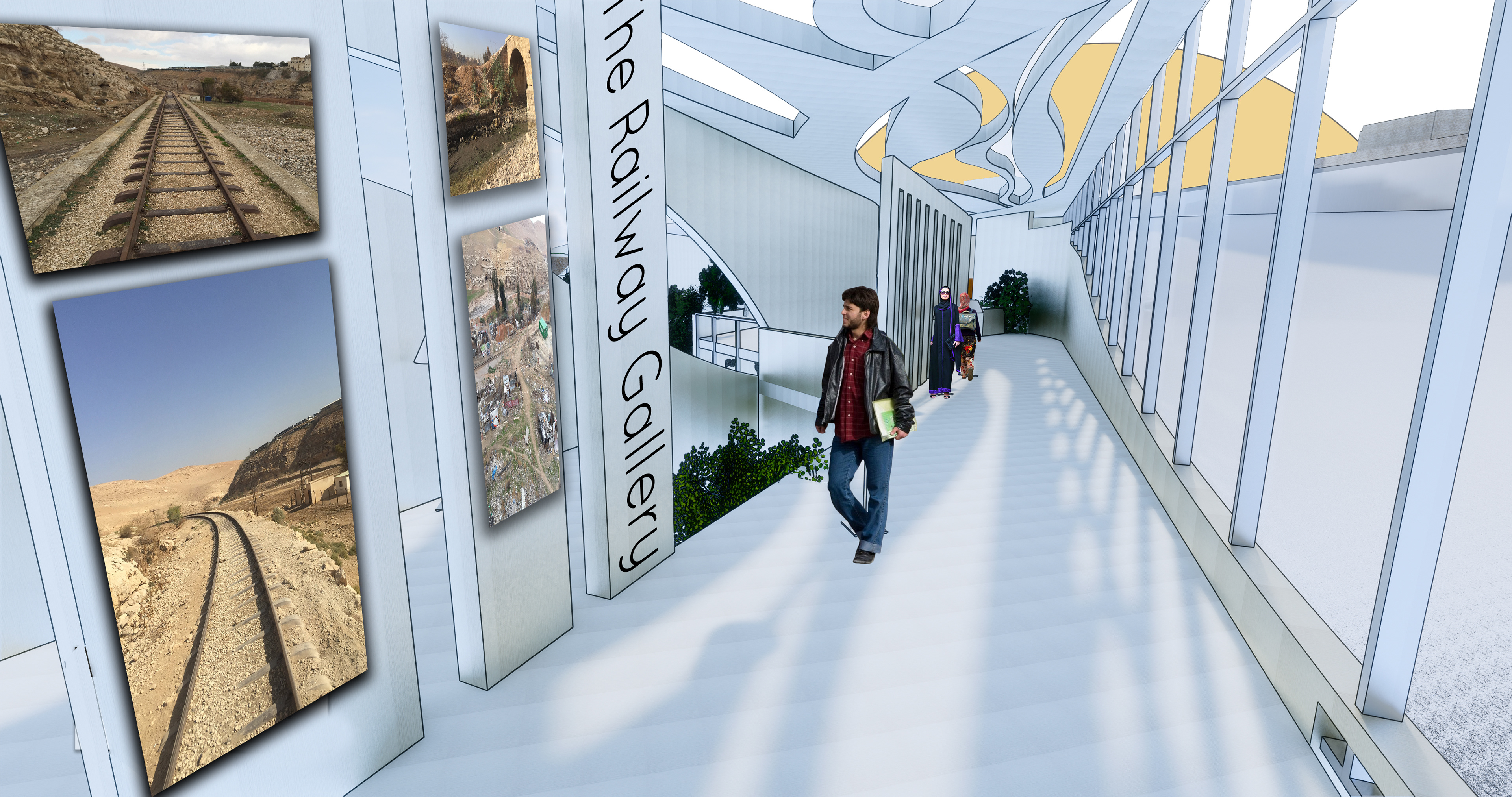 Ain Ghazal - The Context
Being located between a couple of rich residential areas in Amman, Ain ghazal holds not only a social significance, but also very valuable historically, being the first ever farming village ( 10,000 BC ), however, the negligence of Ain Ghazal kept increasing till it became one of the most polluted areas in Jordan.
The pollution that is coming from a vibrant highway linking Amman with Zarqa is not the only source, but there is actually a triangle of pollution surrounding the site : Being the rather "dead" stream, the purification center " That dumps the waste in the stream that then passes through the site, the slaughterhouse that causes the bad smell, and the service center for buses that is located after the site. This all causes for visual and environmental pollution within Ain Ghazal's Context.
Though protecting the site seemed quite straightforward at the from the given points, the challenge rises from the following 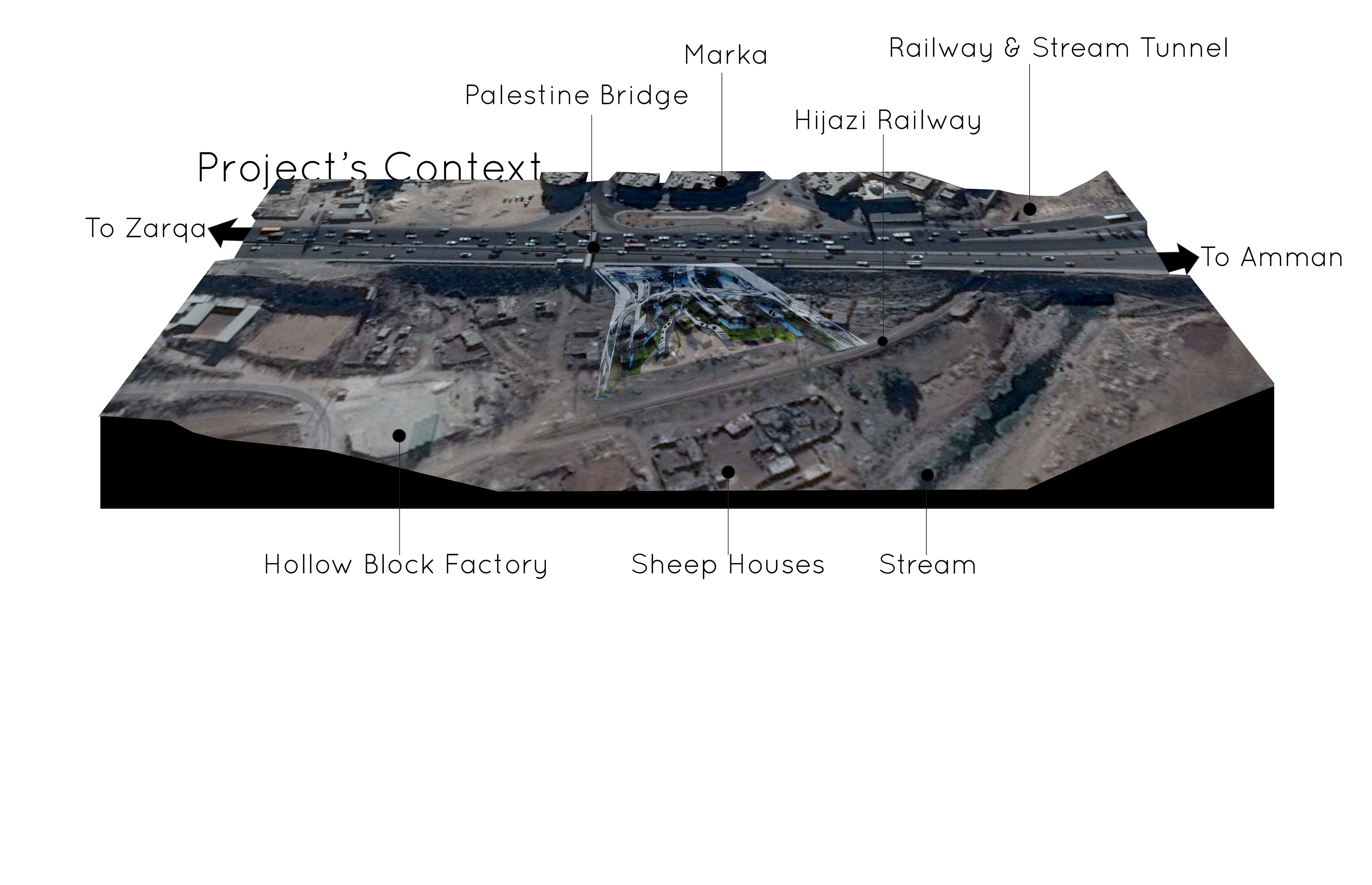 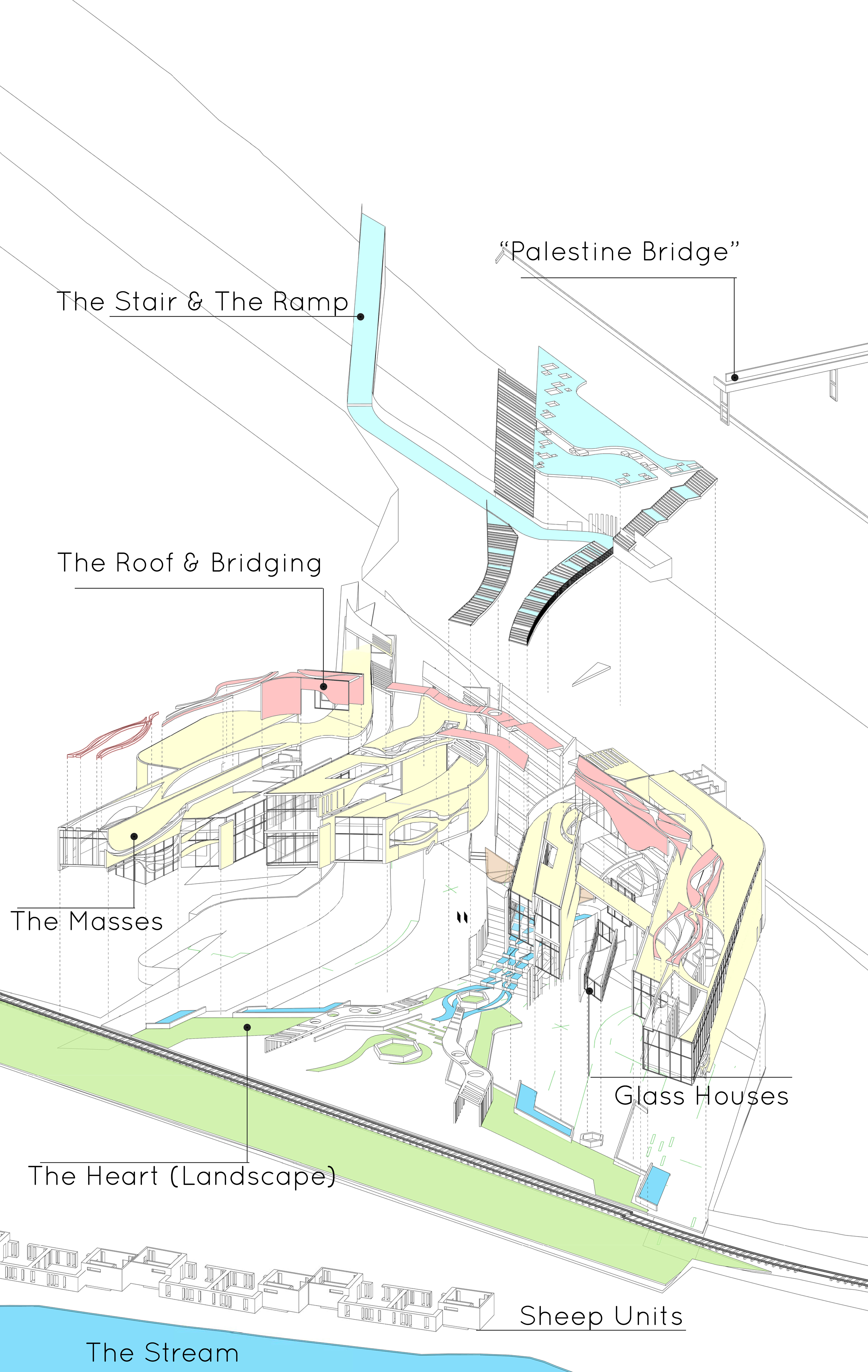 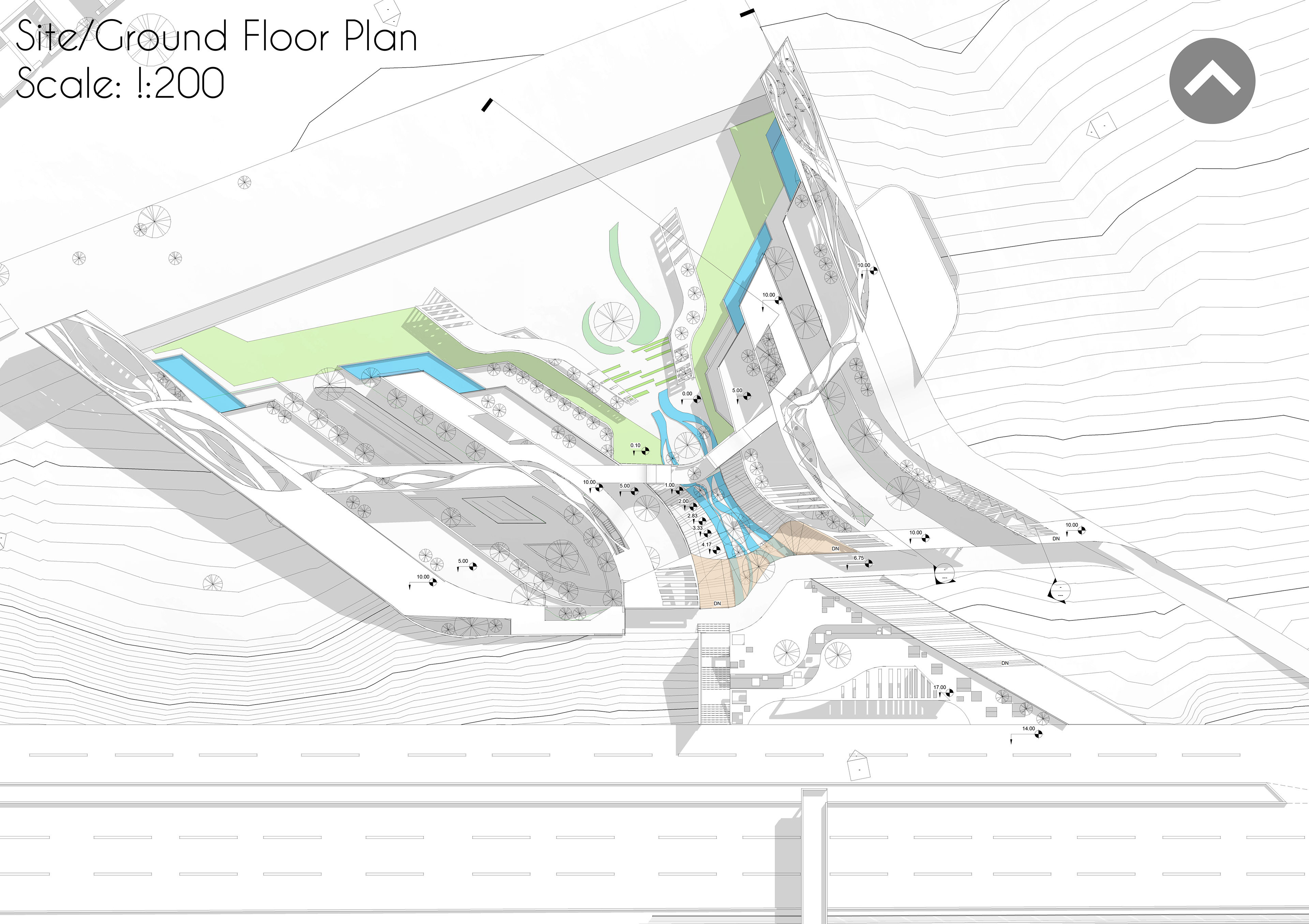 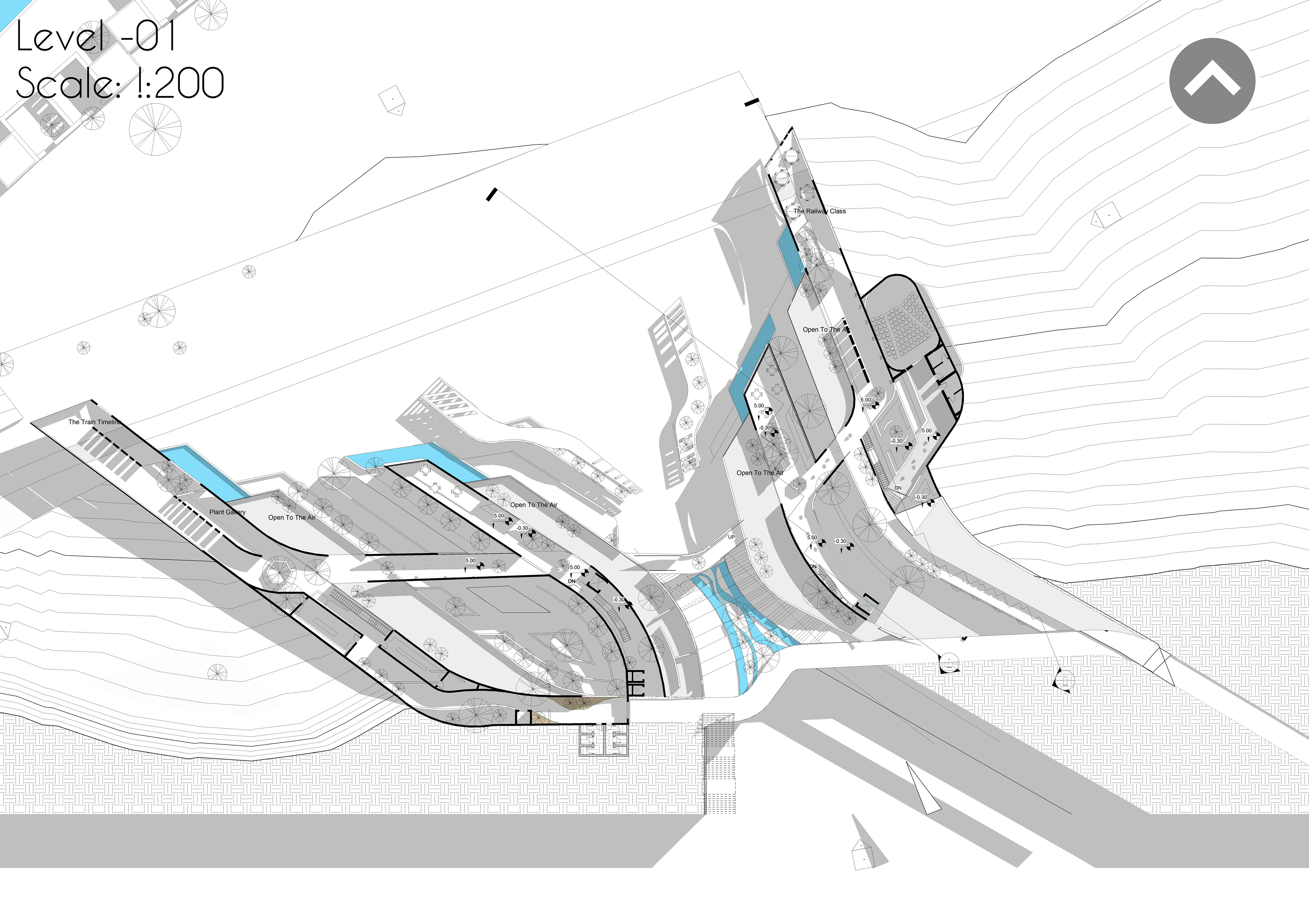 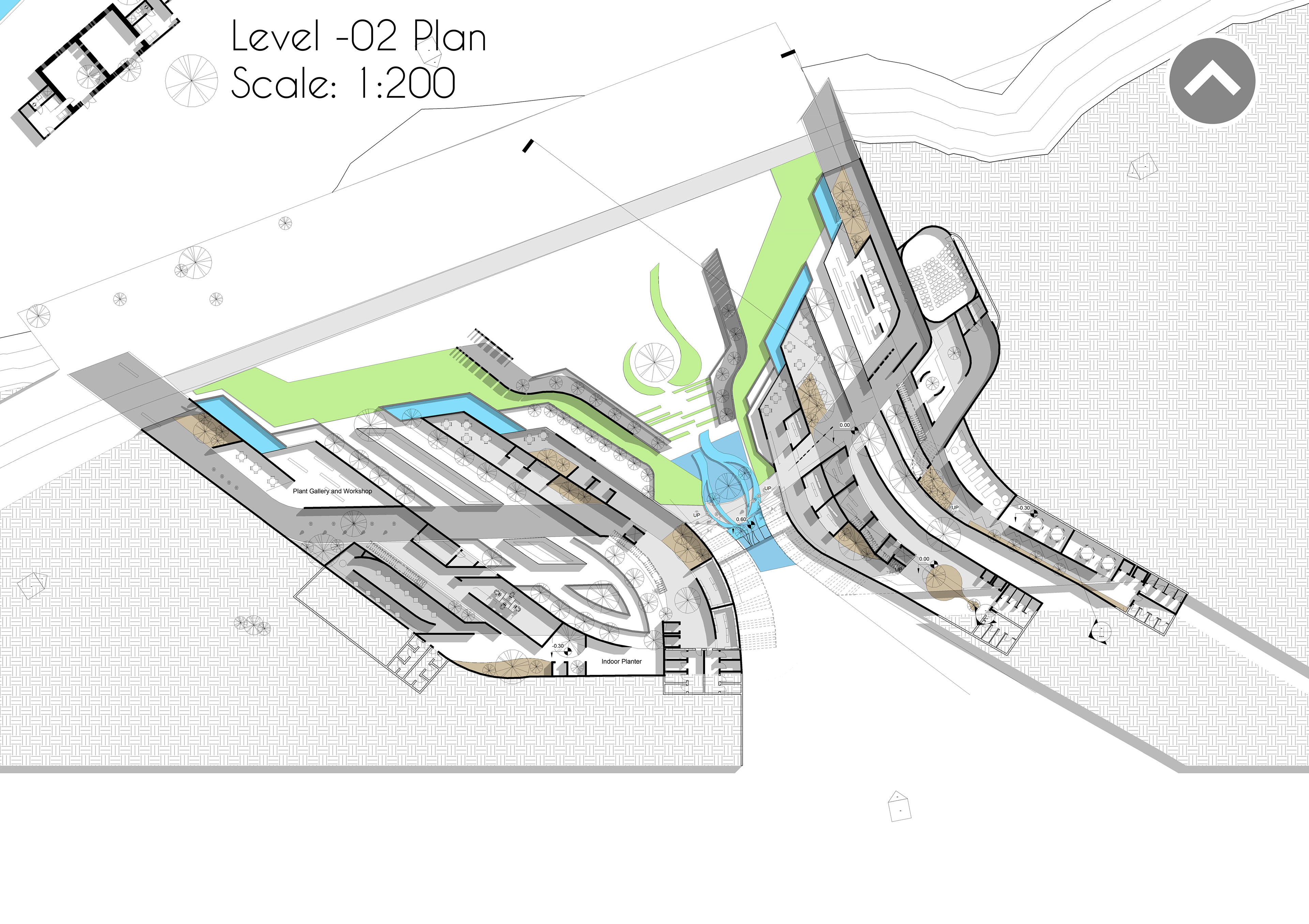 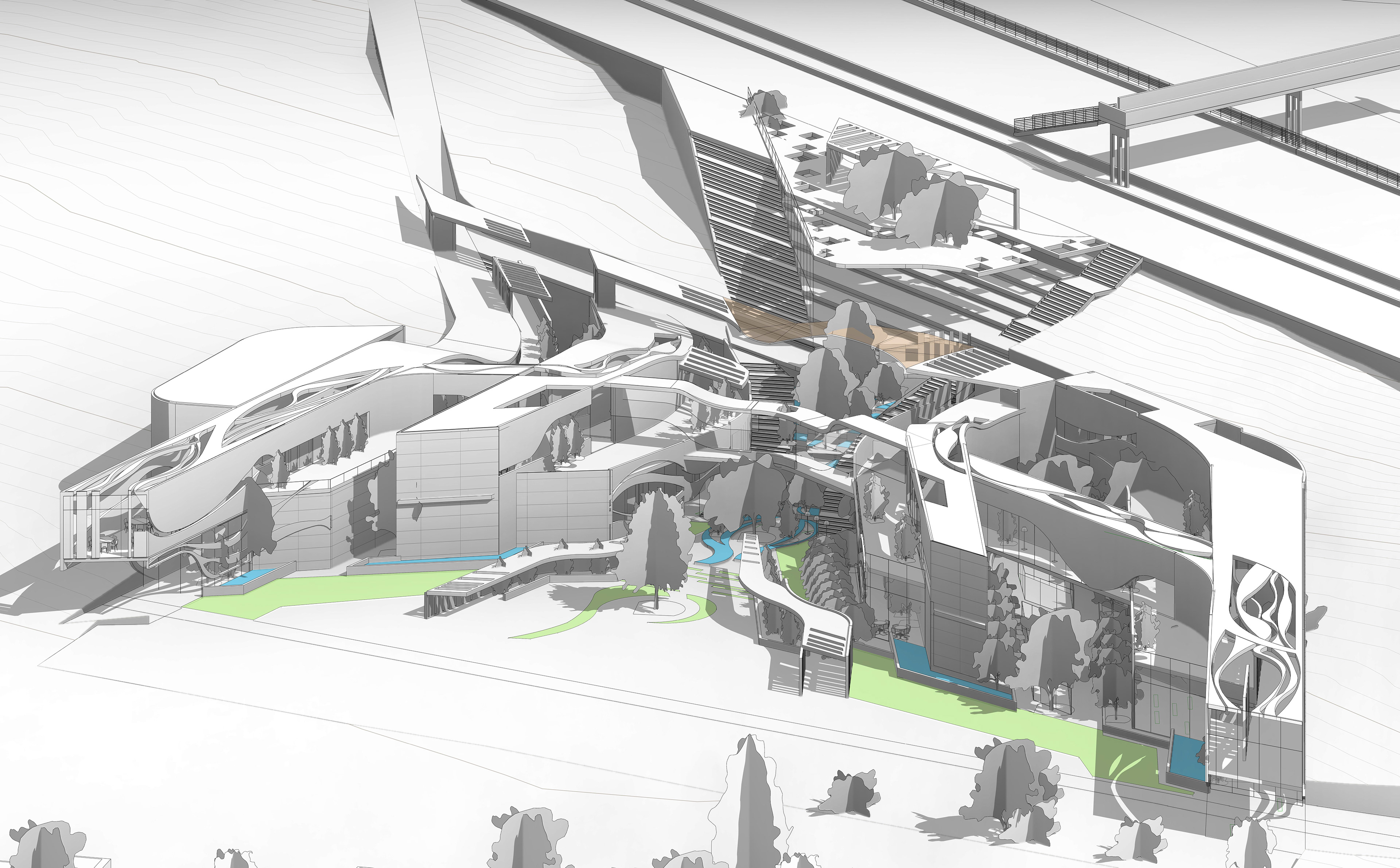 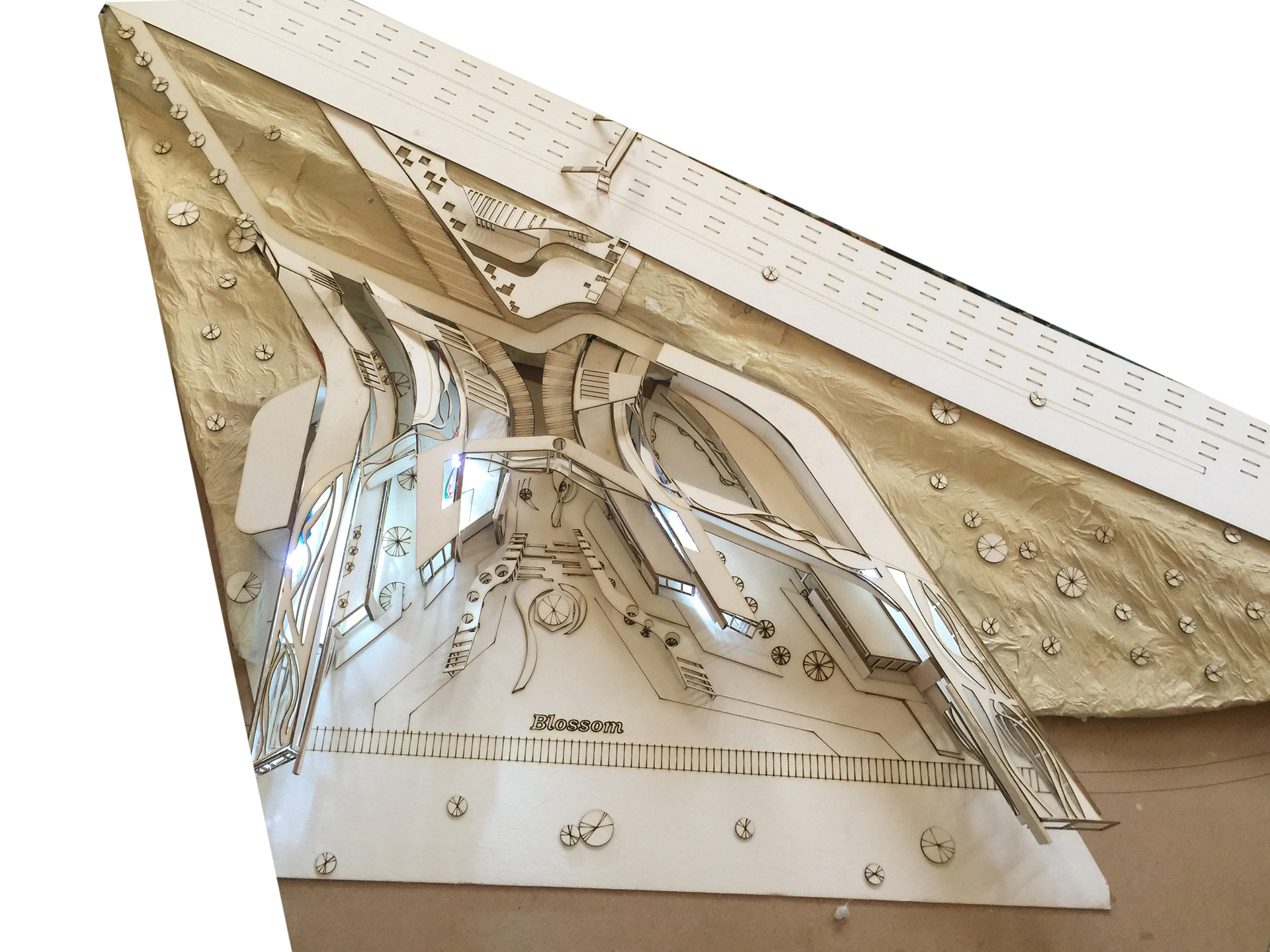 The Stair, the Units , and the challenge!
In architecture, enhancing the quality of a place is not only a matter of creating a mass or a space that is visually pleasing, or extremely functional, but rather maintaining a mini culture that already exists within the site.
Here comes the challenge of creating a space that the local users already know how to use; not changing the patterns of their movements within the site, and maintain their sense of place by enhancing their flow of space and patterns of rising and descending from the existing topography, the pattern of movement was traced through the grass that was peeled off due to repetitive stepping on, which indicated the track of the user's movement within the site.
Between the fear of change and the need of interpretation rises the challenge of designing in this site: The locals have their own "illegal" units that they made off the city's waste ( leftover steel and advertisements posters ), and in these units, they raise their sheep, and during spring, they take them to places with green carpets to feed them.
Moreover, they have built a stair from the concrete of the pedestrian bridge that is located right next to the site ( the bridge has fallen once ).
This stair was the beginning of the design concept, with the line of the stair as a separation line that was forbidden to touch or change its shape, but also as a target to begin with and enhance the quality of.
And through maintaining these sacred lines and the flow of space, an enclosing, hugging space, was created, and that space was best called " The Heart ".
Execution and Implication.
Translating the ideas and the lines created into valid architecture was itself a challenge; from choosing the design language to deciding what goes where, the variants outweighed the constants.
Between the fight between going formal and completely following the existing architecture in terms of materials and form, and introducing a new magnetic architecture that compels local users to discover, there was a fine line that get blurred whenever a certain decision was made: The fear of change, and the need of attraction.
The decision was to satisfy both, simply put, the project contains a rather "new" architecture, with touches that doesn't make the building seem alienized to the locals in terms of materials, and thus, local stone was used on top of the new material - that is Translucent Concrete. Planning wise, however, the vision was clearer, because the main lines were already established from the stair and created the Heart. There are 4 masses:
The Educational Mass : Contains classes, workshops, biodiversity halls, auditorium, and a library.
The 2 Socio-Cultural Masses : Contains Shops, cafe's, and other services.
The Environmental Mass: Contains Research labs, Planters, Memorial wall, Museum, and offices for workers.
With the choice of these masses, the main "green" goal was accomplished, and other perks, such as satisfying local businesses and local shopping needs, educating the youth, and providing organic food for locals by providing a farm next to the Environmental mass.
Download the Project's Research

Project X
↑Back to Top